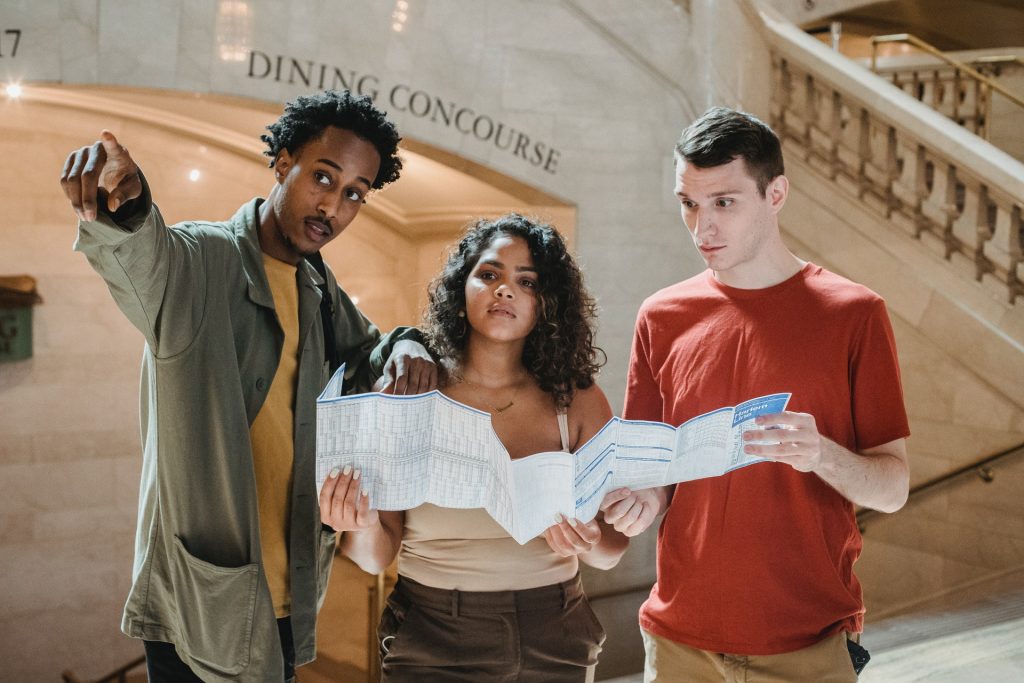 I’ve been directionally challenged as long as I can remember. In the long hallways of my L-shaped high school, I never knew which end of the building I was in, each wing on both floors being the mirror image of the others. In college, I got lost in the library stacks, and in the basement of the admin building where I picked up my mail.

I never told anyone–it was too embarrassing.

In grad school, I attended a lecture one snowy evening at a local university, a maze of identical buildings. My husband, Mike–his inner compass comparable to a migrating bird’s–drew me a detailed map. I parked my car, careful to note my aisle and row, and found the correct building. After the lecture, I unintentionally left through a different exit. Nothing looked familiar, so I went back inside.

“Excuse me,” I said to a student passing by, “how do I get to the parking lot?”

“Which one?” he replied.

I knew I was in trouble. “The one with lots of cars,” I wanted to respond, “and two feet of snow.”

Somehow, my very cold feet made it home that night. I told Mike what happened, ashamed of my faulty brain. How can a smart, professional woman be so helpless?

Different theories suggest how people come to their innate sense of direction, or lack thereof. What I know is, I’m at the extreme end of the continuum.

Even GPS couldn’t save me from being directionally challenged.

The advent of GPS should have been my savior, but saving me from myself wasn’t that simple.

After one incident, my son told me I got lost because I used Apple maps on my phone rather than Goggle maps.

Without saying a word, he took my phone, swiped to the next screen and showed me the big “G,” under which it said “Google maps.”

So, I used the big G when I attended a wake one rainy, freezing February day.

After a few miles, I realized G was stuck on rerouting me, spinning and spinning his wheels. So, I decided to use Navi in my car, although she garbled street names and once tried to drive me into a river en route to my destination. But I hadn’t written down the funeral home address. G had it, but he still wasn’t talking. I searched Navi’s points of interest, but no funeral homes came up.

Then I realized I could ask Siri on my phone, but Siri told me I was no longer a hotspot and couldn’t get internet access.

I sat there near tears. I beseeched my car’s headliner. God, I’m trying to do a good thing here.

Reluctantly, I called Mike at work for directions. He’s used to the routine, and lucky for me, picked up on the first ring.

Even with Mike, who never shamed me about being directionally challenged, I usually pretended I knew where I was going until I got so lost, he had to bail me out. I joked with friends about my problem, but I’d never admit how bad it was. I’d never say, “Will you drive? or “Can I follow you?” I felt stupid. Immature.

It took writing my memoir (having nothing to do with driving directions) to become more comfortable being honest about my challenges and asking for help.

I learned to ask for help.

Recently, before attending a writing seminar on that same campus where I got lost, I texted a friend who was also attending.

“Do you know the campus at all?” I texted her. “I’m a total doofus at finding my way around there.”

“Yes, I went to school there,” she replied.

I asked for a ride, she agreed, and I enjoyed the day without the anxiety of getting lost.

It was so easy. Since I started opening up about my proclivity to getting lost, not one person has made me feel bad. I did that to myself. I didn’t give my husband and my friends a chance to accept me for who I was, faults and all. When I gave them that chance, they didn’t back down.

Give your friends the chance to accept you for who you are, and trust them to rise to the challenge. Click To Tweet

Coming back from the funeral home, I didn’t hit “home” on Navi or G, as all I had to do was make one left turn and I would know where I was. As I pulled out of the parking lot, I returned a call using my Bluetooth. I got my friend’s voicemail and left this message:

“Hi Peggy.  I’m just leaving the funeral home, so you can call me back any … Oh shit, am I going the wrong way? Peggy, hold on a sec.”

(Mumbling) “What the hell street is this?”

It helps to have a sense of humor, too.