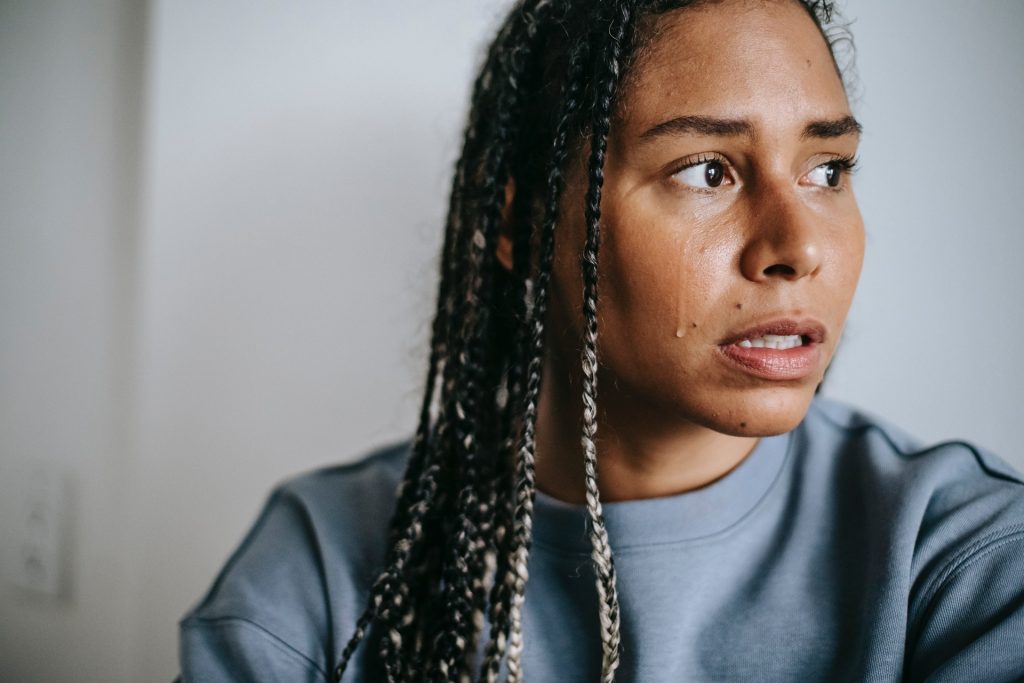 Fear and anger are two challenging emotions, especially for people-pleasers. Last week at a hair salon, I faced them both.

I sat in my chair, barely able to peek out between the highlighting foils falling over my face. My new stylist was not very talkative, and I became aware that the customer in the booth next to mine was bloviating about one conspiracy theory after another.

You know the type. He talked loud enough for everyone in the room to hear, whether they wanted to or not, whether they cared or not.

Internally, I rolled my eyes. I had no intention of engaging with the “gentleman” because:

1) I fear and hate conflict

Then the stylist spun the chair to do the back of my head and I came face-to-face with the loud mouth. Assuming I had willingly joined his audience, he talked right at me.

Seriously? But, for the purposes of this blog, it’s less important what he said than how I felt. And how I felt was personally attacked. My heart pounded so hard it hurt.

It’s a common response for me—this mix of fear and anger—and I’ve been paying more attention to when it happens so I can learn to manage it better.

Fear of conflict is common to people-pleasers. In her book The Disease to Please, the late Harriet B. Braiker identifies three people-pleasing types, based on underlying causes:

Most people identify somewhat with each type, but with a “preference.” I’m clearly a feelings type, and even the anticipation of interpersonal conflict makes my skin crawl. In my memoir, I describe it like this:

In-person, in-the-moment, face-to-face conflict feels like walking into a spider’s web. The sticky strands covering my face, glued to my eyes, pasted to my lips make me panic. I can’t stand the feeling. I have to get it off me, unable to think or reason until I do.

Conflict usually involves some level of displeasure on the part of one or more parties, so it makes sense that fear of conflict and fear of anger go hand in hand for people-pleasers. If you try hard to keep everyone happy, anger means you’ve failed.

Anger has always been a tricky emotion for me. I feel it, and I know it’s normal and healthy, but I don’t always know what to do with it or how to express it in a constructive way. Centuries ago, Aristotle described me so well:

“Anybody can become angry – that is easy, but to be angry with the right person and to the right degree and at the right time and for the right purpose, and in the right way–that is not within everybody’s power and is not easy.”

Not easy, maybe, but important to figure out. And when the two powerful emotions of fear and anger intersect, we usually feel the fear and stuff the anger.

I don’t remember in the past being in touch with my anger in a conflict situation. Maybe it was there, but I was too focused on keeping the peace to know what was going on inside me. I tended to shut down–a fight, flight, or freeze reaction–where I definitely did the latter.

The fact that I now feel and acknowledge anger in response to conflict means I am pushing back internally against being intimidated, that I am fighting the fear. It means I am stronger. If I choose “fight,” I can do it with more confidence. If I choose “flight,” I do it from a position of strength.

Which brings me back to my response to the guy at the hair salon.

When the ranter said–in all seriousness–“Donald Trump is still president,” I couldn’t help myself. With a disgusted smirk, I said, “No he’s not.”

The guy leaned toward me.

“I’m just here to get my hair cut,” I said, my chest throbbing.

“I’m just here to get my hair cut,” I repeated with more force.

And here’s where I see my own growth that I’m sure is invisible to anyone else: I asked my hair stylist to turn my chair away.

Sadly, in the past, although I would have been justified in being rude and unsmiling, my compulsion to be nice would have interfered with my taking care of my own needs, which at that moment were simply a cut, color, and relaxing afternoon.

My truths about fear and anger and conflict

I thought a lot about what happened and came to some conclusions:

I’m going to envision a two-way mirror between myself and whoever is being an irksome jerk. They don’t really see me anyway—they’re just yelling out of their own fear or personal issues—so I can pretend I’m invisible to them and that nothing they say touches me. I can walk away or turn my head, and they won’t even know the difference; they’ll just find someone else to yell at. My two-way mirror makes me invincible.

In real life, I may never be invincible against fear and anger, but having tools to manage these powerful emotions will help me make rational choices about how to respond. With practice, I know fear will lose its grip on me. It’s part of my practice of Becoming Emboldened.

Do you have a strategy to manage fear and anger when they intersect? What would you have done in my shoes?