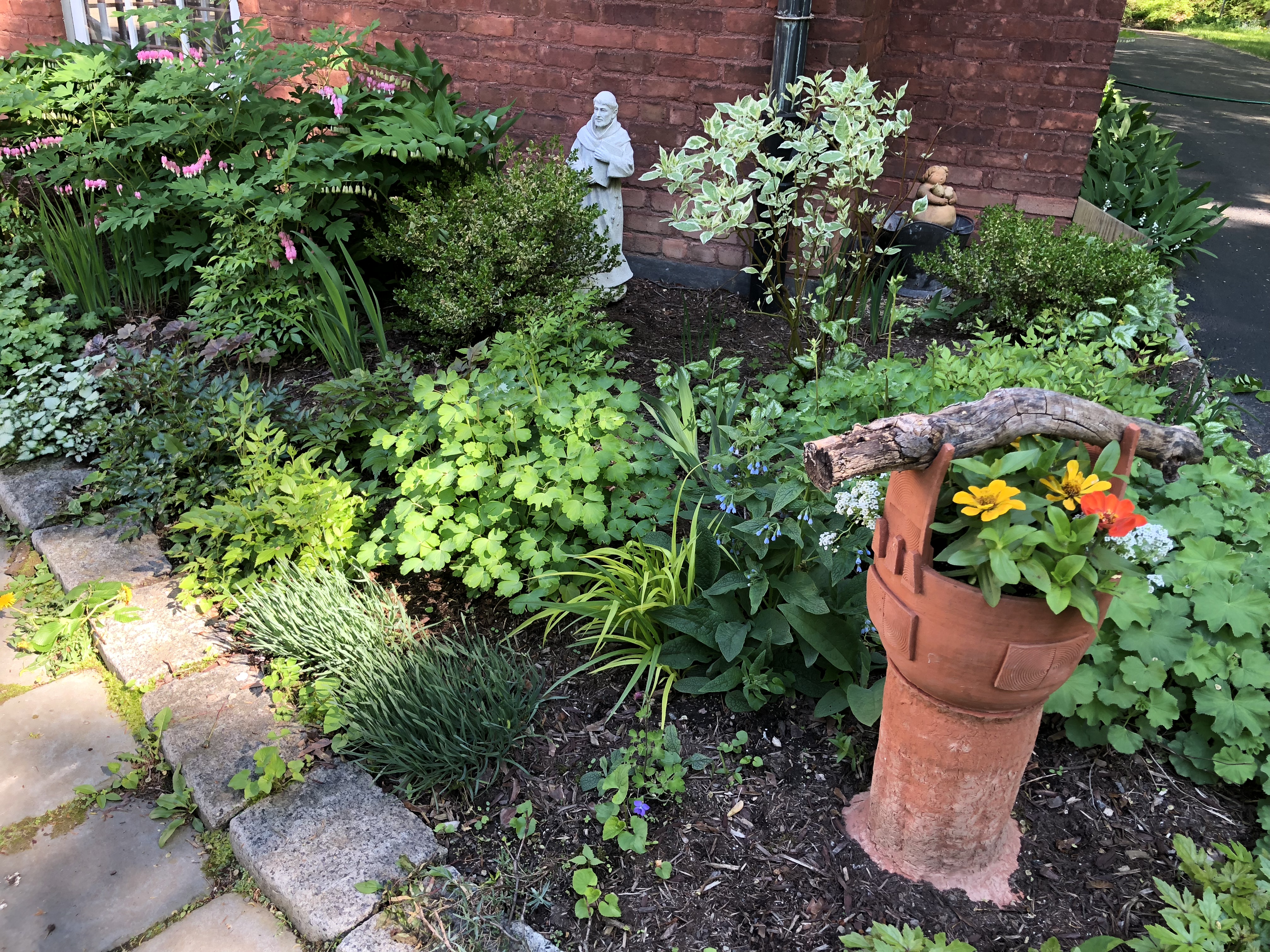 I was a gardener long before I became a writer, and it’s still one of my passions. It’s why you haven’t heard much from me lately–when the nice weather beckons me to the garden, I go. Last year, I wrote about the deer that wreaked havoc on all my hard work (in the garden, not on the page); you can read that below. Since I was losing the hungry critter battle, I started creating deer-resistant gardens. The photo is one example. (In her active potter days, my mom made that pot in the foreground–isn’t it cool?)

Don’t think that I haven’t been writing, too, though, as I have. I finished another draft of my memoir manuscript to show my editor, and she’s happy with the improvements, although more (and more and more) revisions are needed. I submitted another personal essay to a literary journal, and have a version of it ready to go to a large newspaper magazine. It’s a stretch, but if accepted, will be a feather the size of Big Bird in my cap.

Soon, it will too hot for me to enjoy much gardening, so I’ll retreat to the air conditioning and focus on writing. I’ll share another excerpt from my memoir about the challenges I faced as a mom. As you’ll see in my Stupid Deer story below, once you’re a mama, those feelings run deep, and can hit you in surprising places.

The deer members of Club Critter in my back yard are stupid.

There’s one doe in particular who’s not exactly the sharpest point on the antler rack. My husband named her Clarice, like Rudolph’s girlfriend.

Clarice is a regular at my popular social venue, stopping in throughout the day. I thought deer were nocturnal–sleeping during the day and foraging for food at night. But Google says deer are actually crepuscular, meaning they are most active at dawn and dusk.

Clarice doesn’t know she’s crepuscular. I see her at the club in broad daylight, grabbing a snack at my all-you-can-eat garden buffet and lounging in the shade.

A smart deer would be more careful. Humans are predators, after all. I don’t happen to own any deer-hunting weapons more deadly than a broom. But for all Clarice knows, I could be a gun-totin’ sharpshooter just pining for some venison stew for dinner.

If Clarice had half a brain in her pointy head, she would at least try to blend in with the wood fence or a tree trunk. But, no, she prefers the green grass where she stands out like a lawn ornament. Or a target, more obvious than a red-nosed reindeer.

There’s another thing that shows Clarice is two hooves shy of a six-pack. She devours plants that she’s not supposed to like. Google and all the other wildlife experts say unless deer are literally starving, they won’t eat certain flowers and shrubs.

Well, I shut down the deer dessert bar at Club Critter, getting rid of every single gourmet menu item. All that’s left are essentially tofu burgers. The woods behind our house offer a much tastier smorgasbord. But what does Clarice eat? The garden equivalent of napkins and silverware.

The biggest indicator that Clarice is dimmer than dirt is when I try to boot her out of the club. When I throw up the window sash and yell “Go away, Clarice!” she just looks all innocent at me, wagging her white tail as if to say, “How’s it going, girlfriend?” And when I run into the yard in my pajamas, waving my arms and yelling “Git!” Clarice calmly looks up with a mouth full of foliage like I’m the one who’s stupid. I have to get really close and a bit crazy before she finally trots away.

And then, Clarice got sneaky. As I was in the middle of writing this blog, she showed up with Bambi.

He was tiny and downy with white spots and saucer-sized innocent black eyes that made me realize where the term “doe-eyed” came from. He had spindly, wobbly legs that barely kept him upright as he silently pitter-pattered around Clarice in the grass. Bambi gazed up at Clarice and she bent down to lick his head all over, smothering him in deer kisses.

When I saw the pair, I didn’t throw up the window or run out into the yard or yell. I just watched, mesmerized, as they nuzzled and nibbled before they tiptoed back into the woods.

Well, Clarice is dense if she thinks I’m not going to run outside in my pajamas and yell at her simply because she shows up with an adorable little fawn.

If she believes I’ll let her gobble up my garden just because she has another life to care for, she’s wrong.

She’s got another thing coming if she plans to win me over now that I see her as a mama, just like me.

I keep looking out the window, hoping to see Clarice and Bambi again. I wonder if they’re OK.