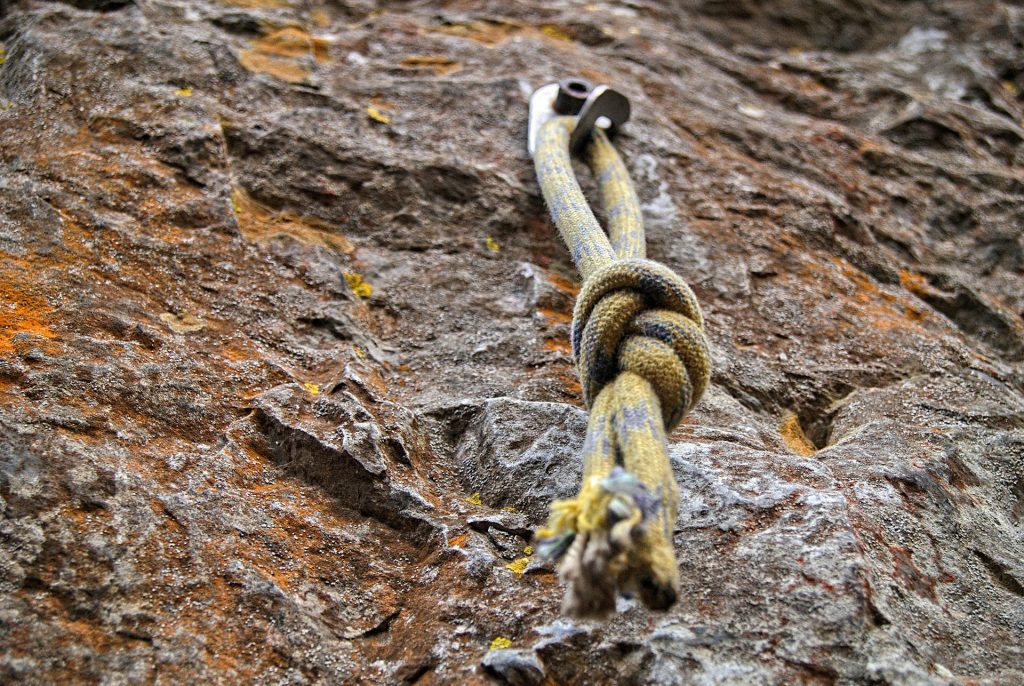 When my younger son Steve took up rock climbing a few years ago, I wasn’t entirely supportive. I thought You couldn’t take up bowling or, I dunno, chess?

When he talked about climbing, I played my mom card, making an occasional gasp and fearful noises. He finally made it clear that my attitude was annoying, so I stopped. Instead, I started encouraging him. Eventually, I told him I’d like to try it sometime—indoor climbing, that is. I decided to actively face my own fear in a way that would support my son.

“Sometime” happened over Christmas. I wanted our family to celebrate the season with shared experiences, not just gifts. I’d have been perfectly happy with tickets to The Nutcracker, but when you’re trying to enlist the enthusiasm of a husband and two grown sons, ballet wouldn’t cut it. Rock climbing would, so that became the plan.

As a certified chicken, this was big. I hate heights, hate going fast, and hate doing anything where I might get hurt. The one time I tried cross-country skiing (because I’m WAY too scared to even consider downhill), I took off my skis to walk down an itty-bitty hill. I rarely even ride a bike anymore because I’m afraid of falling.

As it turned out, indoor rock climbing was much safer and less intimidating than I expected. There are harnesses and safety ropes and a belayer—a fellow climber on the ground—managing it all. It wasn’t a big deal after all; just an itty-bitty deal.

My fear was unfounded.

The really big deal happened midway up the rock on my second climb when I accidentally banged my knee on the rock. Actually, it was more of a tap, but wow. Do knees have funny bones? If so, they’re not funny. The pain took my breath away and my whole leg shook for minutes afterward. (This was before I got both knees replaced.)

I couldn’t even yell down to tell my belayer why I wasn’t moving. All I could do was hold on and wait for it to pass. That’s not exertion on my face in the photo below, it’s pain.

My body was momentarily paralyzed but my mind was busy with negative messages.

I felt so defeated. It was another family outing ruined.

Just a few days prior, we had reservations for dinner and tickets to a comedy show. It was our “big” Christmas gift to ourselves. But my chronic illness choose that day to tangle up my insides worse than a knotted rope. We had to cancel our plans.

My “three favorite guys” were supportive, but I was distraught. My year had been full of canceled plans and ruined experiences, and this one was the pinnacle of ruination. But there was nothing I could do; there was no fighting it. So I pulled myself together, we got take-out, made a fire, and played a board game. We were together. It was Christmas. How could I complain?

Several days later, my chronic illness cooperated and I was psyched to redeem myself with family rock climbing. Until the bang of the knee.

Finally catching my breath, I yelled to my guys.

“Do you want to come down?” my husband yelled back up.

I pictured letting go, leaning back, and rappelling down. I pictured myself standing on the floor below, having quit.

I was literally stuck between a rock and a hard place. The hard place was defeat.

I was stuck between a rock and a hard place–defeat.

Something within me decided that this time, defeat was not acceptable. I don’t always have control over my chronic illness, but I knew I had control over a banged knee.

Waiting until my leg stopped shaking, I yelled down, “OK, you got me, Steve?”

I took a tentative step up to another foothold. Then another. And another. It was hard, and it hurt, but I did it. When I reached the pinnacle, I slapped the top of that fake rock like I had climbed Mt. Everest.

It felt so good, my chest swelled with pride as it heaved with breathlessness. I almost started crying with joy and relief right there, but I sucked the tears back in because nothing would have made Steve avoid family rock climbing in the future more than a public display of my ugly cry. “Leaky faucet,” he used to call me.

Call me what you want. I was a winner that day.

I learned some important lessons:

What fear taught me:

Call me chicken, call me leaky faucet, call me what you will.

I know who I truly am, what I’m truly capable of.